Rawan Abdelbaki (doctoral candidate). Rawan holds a BA in Sociology and Political Science from the University of Toronto, and completed her MA studies at York University (Sociology) with a research review paper titled Neoliberalism and Canadian Immigration: Rethinking the Land of (In)Opportunity. Her research interests lie in the areas of transnational migration, citizenship, political economy, racialization, political subjectivities, and diaspora studies. Her work is inspired by a smorgasbord of theoretical traditions, namely marxist, feminist, anti-racist, and postcolonial approaches. Rawan is also a labour activist, and is a graduate student affiliate of York University’s Global Labour Research Centre. 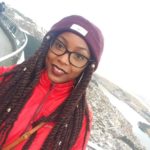 Beatrice Anane-Bediakoh is a fourth-year Ph.D. Sociology student at York University. Her research interests lie in the areas of Culture and Identities where she utilizes critical race literature and theories of racialization, space, and place to examine spatializing processes that produce uneven racialized geographies. Beyond her academic work, she is intimately invested in Black communities where in partnership with the Black Community Advisory Council and Big Brothers Big Sisters of Peel, she participates as a Big Sister/ Mentor, alongside, offering tutoring services to low-income families in both Toronto and the Greater Toronto Area.

Sonia D'Angelo (doctoral candidate). Sonia is interested in the relation between race and Canadian agriculture. More specifically, she is investigating how racial identities of Canadian growers/farmers coordinate and organize agricultural production. She is chiefly interested in questions around subjectivity and race. What are the subject forms which arise in the field of agricultural production? And how does race anchor the conditions of productivity in Canadian agriculture? By focusing on Canadian growers/farmers, she intends to conduct an investigation of the formations and meanings of whiteness in Canada.

Alixandra Holtby (doctoral candidate). Alixandra's research interest broadly concerns the historicity of sexual and gender identity categories. She is particularly interested in the relationship between the emergence of sexual identity categories and statistical modes of reasoning within the United States in the late 19th and early 20th centuries, with a focus on how these two domains overlap with the ideology and social policies of eugenics.

Dann Hoxsey (doctoral candidate). Dann's dissertation will consist of an ethnography on men seeking men in public for sex in public places (aka. the male cruising culture). He will be looking at a broad range of venues but is particularly interested in public parks and washrooms and the impact of the environment on how people cruise in relation to the criminality of the act. He will be using Foucault’s analytic of governmentality to understand how power is exercised through (heterotopic) space and (dividing) practices. This is particularly relevant to understanding the transmutability of space as public and/or private. Interestingly, some of his preliminary work challenges the notion of the isolated, closeted, 'gay’ male that came out in Humphreys’ work. Rather than exhibiting feelings of shame or a need to hide their activities from others, preliminary research indicates that people who cruise are quite eager to talk about their experiences and are less isolated, desperate, and even ugly! than is assumed. This lack of shame has led him to consider the possibility of 'pleasure-cruising' as a quasi-counter-conduct.

Caitlin Janzen (doctoral candidate). Caitlin's research works at the interface of the social and the psychic to explore the role of women as spectators, witnesses and/or consumers of graphic depictions of violence against other women. Influenced by feminist uses of psychoanalysis, critical theory, critical race theories, and postcolonial studies, her research uses case studies from the Canadian news media to film and television in order to analyze women's aggression towards the feminine, and the social and political structures that support and perpetuate such forms of aggression. Sabrina Paillé (doctoral candidate). Sabrina's research interests include classical and contemporary sociological theory; the sociology of modernity; ethnicity and race relations; multiculturalism; nationalism, as well as social and political philosophy. Her PhD research project will investigate the mobilization of the language of gender equality and sexual freedoms in the rejection of multiculturalism and anti-immigration discourses in Western Europe. She will address the meaning of the mobilization of gender equality and sexual minority rights, depicted as uniquely national values, with respect to the construction of the symbolic borders of the ‘nation’. Her interest in these issues was triggered by the debate on the proposed Charter of Quebec values in the fall of 2013. It relates to her broader concerns regarding processes of ‘othering’, the contemporary transformations of racism and the multiculturalism backlash.

Janice Phonepraseuth (doctoral candidate). Janice's research interests focus on the racialization and ethnic identities of refugees from Southeast Asia and their children in Canada. Her dissertation will compare experiences of identity and belonging among different generations and different ethnicities. The research will also examine their overall incorporation and settlement.

Rehanna Siew (doctoral candidate). Rehanna's doctoral project investigates how pathways to citizenship shape the social mobility of East Indians from Trinidad and Tobago (Indo-Trinidadians) who arrived to Canada in the late 1980s during tightening immigration policies. Specifically, this project examines the daily lives of these immigrants who settled as either non-status residents or inland refugee claimants, and the way they (1) accessed employment, education, health, and housing, and (2) now define their sense of belonging and social mobility almost three decades after their precarious migration.

Rebecca Smith (master's candidate).  In her master’s thesis, Rebecca is studying the experiences of Indigenous students at a small Canadian university. Through a focus group and individual interviews, she has gained insight into the challenges they face, the supports they receive, and where they see room for improvement. By rooting her findings in their narratives, she hopes to be able to provide the community with meaningful research and recommendations for future action.

Suzanne Spiteri (doctoral candidate). Suzanne's research interest focuses specifically on female sex tourism in the West Indies, specifically Jamaica. She is particularly interested in the enactments of masculinity and race on part of the local men who engage in transactional sex with tourist women.

Sam Tecle (doctoral candidate).  Sam's dissertation analyzes the experiences and perspectives of race and blackness of East African Diasporas across the US, UK and Canada asking how these might differ across the various national contexts. This research aims to develop a novel approach of understanding race, diaspora and ethnicity that signal a break away from static and monolithic post-Cold War permutations.

There are no upcoming events.